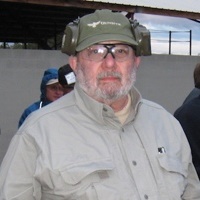 Although interested in guns and shooting as a child, Frank put that aside to attend to his education and then career as a corporate lawyer. Finally, around 1995, he had a chance to finally pursue his avocation and took a Basic Handgun class. Since then he’s made up for lost time.

Frank has participated in United States Practical Shooting (USPSA), and Single Action Shooting Society Cowboy Action Shooting competition. He is also a life member of the Amateur Trapshooting Association and Pacific International Trapshooting Association and has been a regular competitor, including shooting at several California State Championships and the Grand American (the ATA national championships).

As a shotgunner, he’s helped teach many beginners trapshooting and wingshooting. He and his wife, Marcella, with head coach and Hall of Fame member, the late George Reppas, helped start and coach a Scholastic Clay Target Program youth group at their local club, taking a team to win the State Championship in 2005.

Something of a training junkie, Frank has taken classes at Gunsite, and with well know instructors such as Louis Awerbuck and Massad Ayoob. In 2010, he had the opportunity to serve as one of Mr. Ayoob’s assistant instructors at a class in Sierra Vista, Arizona.

Frank retired from the practice of law in 2007.